Command prompt is a line interpreter, Non-graphical interface application in most of the Windows operating systems.

It is used to execute entered commands but it has been replaced by PowerShell in modern versions of windows.

So, just like a lot of other people, you might also be looking forward to using the command prompt instead of PowerShell.

For that, I’ve explained how you can switch from PowerShell to Command Prompt in your windows OS.

How To Open Command Prompt inside a Folder Or Directory

You can open your command prompt by typing names followed by ‘OPTIONS’ and ‘ARGUMENTS’ for example advanced administrative functions, troubleshoot, and certain kinds of windows operations.

The most common way to open the command prompt is by going to RUN→CMD but it opens in the user’s profile directory path, Check the below provided screenshot:

This is the easiest method to open the command prompt within a folder.

1. Open the folder in which you want to open the command prompt.

In this method, you need to use the ‘address bar’ of your windows when you’re in your desired folder.

Once you’re in the right folder, follow the below steps:

1. Click on the location bar of windows explorer and type ‘CMD’

Now if you want to open it into an administrative mode, follow as:

2. Type CMD in the available dialogue box of the RUN window. This will open the CMD registry.

3. Then press Ctrl + Shift + Enter together to open the command prompt

Once again, after following the above steps, a command prompt window will be opened but this time it will in “Administrative Mode”

Let’s catch up on the next method in our list:

In previous versions of Windows 10, there was a context menu entry called “open command prompt here” which has been replaced by PowerShell.

You can still bring back that option just by making the below mentioned changes in the windows registry.

So, the steps for doing so are as below:

2. Type regedit in the available dialogue box of RUN window.

3. After pressing OK, the following window will open.

5. Further follow the path to explore as: Directory >> shell >> cmd

6. In this step, ‘Right Click’ on cmd and go to permissions, as being shown in the window

7. There will be an option called Advanced options, ‘click’ on that:

8. After that, click on the Change (Clickable blue text) on top of the window

9. Then, type your username in Enter the object name to select and click on the Check Names for verification and,

11. After being done with this, go to Permissions for Administrators and ‘tick’ on the Full Control.

Now you can close the registry editor instance and go to your desired folder, and: ‘Press’ ‘Shift’ + ‘Right Click and you will start seeing the command directory as below:

Although PowerShell is a more advanced alternative to common windows command prompt still some people insist on using the command prompt.

For them, we have a trick to replace PowerShell with a command prompt.

Below are the steps if you also want to do the same:

Now turn ‘check’ or ‘un-check’ the replace command option according to your computer settings.

The above picture is taken from windows 8 bar.

Method #5: Only for Windows 10 and Windows 8 Users

This is yet another one of the easiest ways to open the command prompt.

Just navigate to the specific folder and click on the File menu from the ribbon tabs.

For Windows 8 users, there will be a separate command being shown above the PowerShell command.

Lastly, if you’re unable to make a successful switch from PowerShell to Command Prompt, you can still open the command prompt by using PowerShell itself.

The next section tells exactly the same:

First of all, open PowerShell in your windows:

The command prompt will be opened in a new window as being shown below. 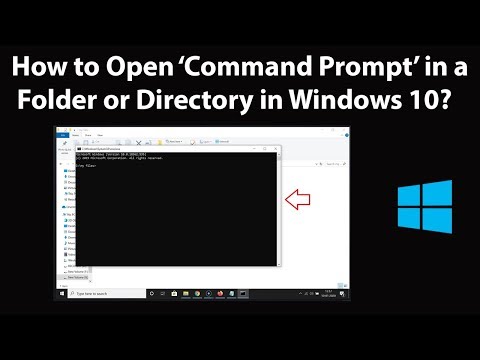 This sums up our today’s article, Do let us know if you’ve found it useful.

If you know another effective method for the same purpose or have any other query, you can let us know in the comments section or reach out to us through our website’s email.